Trophies mean different things to different athletes. Many hunters hang big game heads on their walls as a reminder of a story, memory, or special adventure. Others just want to show their ego. To each his own.

For most hunters, a trophy is a legal, ethical, and successful result of a hunt or an excursion. This big buck, bull or fish is at its best when accompanied by a great story.

Some guys like a trophy wife. They may be good looking, but can they cook, clean and own a great hunting dog? For many, it’s about a partner who values ​​you and who you are and what you do. Or maybe they have a fancy sports car, a big truck, or a huge boat that also meets their needs.

My first white-tailed buck was a great trophy! As a teenager it was my first deer and came with great effort. My friend Vernon and I went deer hunting on a snowy mountain. It was cold, miserable and far from my car. After hours of wading through the snow, I finally spotted a buck with several females. They were moving and wouldn’t stop. I picked up my 30-30 with my new Tasco scope, aimed for the shoulder and took an awesome trophy shot at 150 yards. 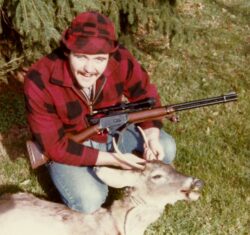 We found my trophy and realized the work was just beginning. The car was several miles away and the snow wasn’t our friend. Together we put on the goat and started the long way to the car. Once we tied the goat to a pole and carried it on our shoulders in the Indian way. The swaying deer made it difficult for us to keep our balance. Up a mountain, down a mountain, across a river, up a cliff and finally we hit the street where I had parked. I went to the car and we loaded my trophy.

This great buck was my first trophy! Although it was only a goosebuck, everything else about this hunting adventure makes it trophy worthy! I’ve tagged many larger bucks and bulls since then, and each one is a monument to history. It happened in a certain place, with a certain friend, in a certain way.

During an outdoor show where I had just finished a seminar on moose hunting, a guy came up to me to show me his trophy moose. It was a 7-8 bull he shot. I have learned to be polite and not to ask many questions. He insisted on sharing his story. During the story he mentioned that he had trespassed, gotten away with it, shot him off the street, out his truck window, and dragged the cops 2 miles in his truck before he could gut him. That was his “trophy”! I wonder what his wife looked like. His amazing trophy is hanging on his living room wall, but I wonder what he thinks when he sees it. Will he be reminded of how he poached, trespassed and cheated? That’s worth less than a participant’s trophy!

The greatest trophies are deserved, ethical and exciting. It’s not the size of the antlers, the length of the fish, but the adventure and history that accompanies the trophy. That’s why I’ve never been interested in paying to hunt on a trophy farm. Sure, you’re guaranteed to have shot a large animal. They hunt from a stand where they place you, do as they say, and don’t have to gut, drag, or process the animal. You pay a trophy price so others can handle your trophy. This is not a hunt. I’d rather pay for a beef from the butcher.

Trophies are symbols of many things. First, they remind us of a time when we made all the right choices and decisions and legally and ethically harvested an animal. Friends and family witnessed and supported these moments. Every time we look at these trophies, we remember this special adventure. Second, these trophies are a respectful memorial to the great creatures that have enriched and nourished our lives and bodies.

Each hunting and fishing season remains in our lives. The need for a trophy decreases with age. Getting older prevents us from tagging the biggest buck or catching the biggest fish, but if we can still hunt and fish, it’s the BEST!