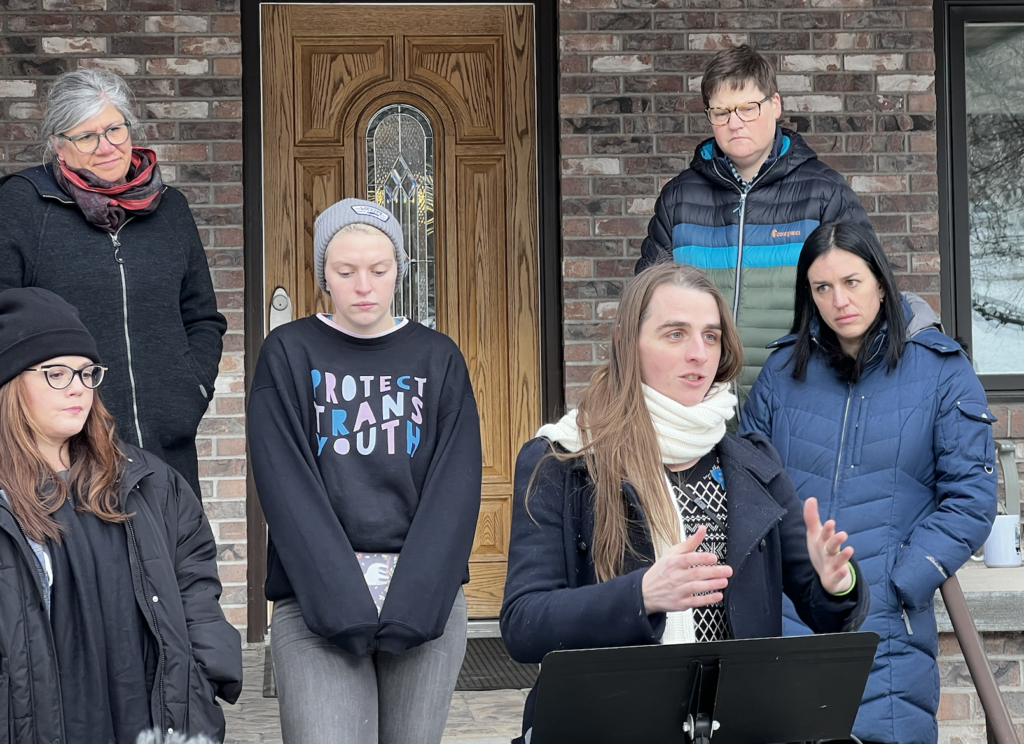 Lawmakers, transgender Montans and the Montana Human Rights Network called a series of Republican proposed legislation a “tablet of hate” during a Tuesday news briefing.

Shawn Reagor of the Montana Human Rights Network said the organization is monitoring 54 bills going through the legislature that it sees as anti-LGBTQ, including Senate Bill 99 that would ban minors from undergoing gender-based surgery.

“We recognize that we have quite a battle ahead of us in the face of supermajority and the legislature,” Reagor said. “However, we are determined, whether in the state legislature or in the courts, to ensure that none of these bills go into effect and wreak havoc on our community and the state we love.”

SB 99, introduced by Sen. John Fuller, R-Kalispell, will have its first hearing in the Senate Judiciary Committee on Friday.

Fuller introduced legislation similar to SB 99 during the 2021 legislative session, but it died in the Senate.

Rep. Laurie Bishop, D-Livingston, said part of what makes the strategy different in this session is that there are transgender representatives in the legislature.

Rep. Zooey Zephyr, D-Missoula, the first trans woman elected to the Montana state house, said she was approached by moderate Republicans who told her they didn’t want to see anti-trans legislation and in their Party worked to try to “curb these attacks”.

“It’s on all of us in the Legislature, but especially myself and MP (SJ) Howell, to make sure we stand in front of these people and they understand the direct impact this is having on our lives and the people we care about. ‘ said Zephyr.

Also included in the “Slate of Hate” is HB 234, sponsored by Rep. Bob Phalen, R-Lindsay, who would set public libraries, museums and public schools under criminal charges, possible fines of up to $500 and six months in prison Montana obscenity law.

The bill was heard in the House Judiciary Committee last week, but executive branch action has yet to be taken, according to the LAWS tracker.

Reagor said they would like to see more involvement from the governor’s office.

“We were very disappointed with the response of the governor’s office to seek to prevent these bills from being passed,” Reagor said.

Zephyr also spoke about the anti-trans legislation from a national perspective, saying that more than 200 bills have been introduced across the county.

The ACLU tracks 185 laws in the United States and lists SB 99 as one of Montana’s anti-LGBTQ statutes, along with Rep. Braxton Mitchell’s R-Columbia Falls bill that would ban minors from attending drag shows.

Kyndra Nevin said she has been campaigning for transgender life since 2008.

“I’m glad we’re finally calling it what it is: The Tablet of Hatred,” she said.

Nevin said these bills consist of untruths and dehumanizing and defamatory language.

“It’s being done by people who I know don’t know us as a community, trans people like me,” she said.

Lauren Wilson, a pediatrician and president of the Montana Chapter of the American Academy of Pediatrics, said her organization opposes SB 99, along with a number of other medical associations in the state, including the Montana Medical Association and the Montana Hospital Association.

A spokesman for the Senate GOP could not be reached for comment Tuesday.

Jaime Gabrielli, a parent of a trans child, said there is no legitimate rationale behind any of these bills, only harmful misinformation.

“I’m here to tell you that our child’s life is not up for debate regardless of whether these bills pass,” she said.

List of “Slate of Hate” bills as provided in an MHRN publication: