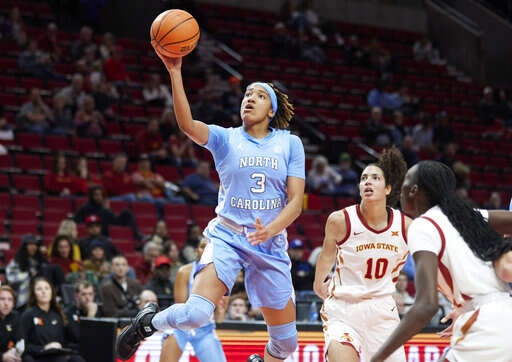 “We’re watching them come together as a team right before our eyes,” said North Carolina head coach Courtney Banghart. “It usually happens on the practice field. These guys are really becoming a team. We got better this weekend and that was our goal.”

It was the third straight game North Carolina trailed at halftime before rallying to win.

Stephanie Soares led the Cyclones (5-1) with 19 points and 12 rebounds while Ashley Joens had 18 points and nine rebounds as Iowa State suffered its first loss of the year.

Iowa State controlled the game during the first two periods and went into halftime with a 35-22 lead, behind 12 first-half points and nine rebounds from Soares.

The Cyclones led by as much as 17 points in the second quarter, but after halftime the Tar Heels began to close the gap. A 15-0 run in the fourth quarter gave North Carolina their first lead of the evening, which they never gave back to Iowa State.

North Carolina: The Tar Heels topped the table in the PKI tournament to go undefeated this season.

State of Iowa: The Cyclones put on a mixed performance in the PKI tournament, dealing with No. 18 Oregon in the opening game before wiping out a 17-point lead over the Tar Heels in the championship game.

State of Iowa: The Cyclones return home on Tuesday to take on SIU Edwardsville.

North Carolina: The Tar Heels travel to Bloomington on Thursday to take on No. 6 Indiana.