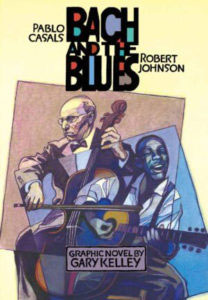 A graphic novel by a man from Northeast Iowa juxtaposes two radically different musicians who have faced similar, simultaneous challenges.

Cedar Falls author and illustrator Gary Kelley says that blues legend Robert Johnson and cello master Pablo Casals produced iconic albums during the same week in history—late November 1936—and that this was the subject of his new book, Bach and The Blues” is .”

“I had already written a book about Robert Johnson, a picture book for young readers, because I’ve always been a big fan of his story and his work,” says Kelley. “I did some homework, did a little research on the history of Pablo Casals. He also had a very dramatic life and that really pulled me into the story or should I say kept me, kept me in the story.”

Johnson, a singer and guitarist, was born in Mississippi and recorded 29 songs in Texas during his brief career in 1936 and 1937. He is considered one of the greatest blues artists of all time, but recognition largely came after his death. By the age of four, the Spaniard Casals could play the violin, piano and flute and became one of the world’s greatest cellists – while being persecuted for his political views.

Casals recorded Bach’s classical suites at London’s Abbey Road Studios, which the Beatles made famous again some three decades later. Kelley, who is 77, says the stories of these two musicians are compelling on their own, but considering some of their best recordings were made in the same week in 1936, it’s an amazing coincidence.

“Of course Robert Johnson was into Jim Crow South and he was still an iconic musician,” says Kelley, “and Pablo was an iconic cellist, despite Franco, Mussolini, Hitler, all the guys who didn’t want him around. and he had to survive in Europe at the same time.”

A performance by the Waterloo-Cedar Falls Symphony earlier this month featured both men’s music while images from Kelley’s novel were projected across the stage. “I love doing pieces, images that are projected on a big screen over the musicians to a big audience,” says Kelley. “It’s all in color. They are not black and white copies of the graphic novel. They are not pages from the graphic novel. It’s the same story but with a little more color and depth.”

Although he has authored more than 30 art books, Kelley’s Bach and The Blues is his second graphic novel. The 64-page book is published by North Liberty-based Ice Cube Press.