IOWA CITY, Iowa — Football workout photos are now a daily event for the Iowa Hawkeyes program, and this block of time is considered one of the most important 10-week periods of the calendar year.

It is the build-up phase where weight gain and strength are the focus. Offensive linemen often see a big jump when they max out and step on the scales. It runs until spring break when, after a week’s break, the program begins with five weeks of training. That makes this the perfect time to examine the program through five facts or myths.

Coach changes are in sight

The only topic Iowa fans want to know involves the offensive personnel. Will Brian Ferentz remain offensive coordinator? While it’s still unclear at this point, there could be clarity on his status and other assistants as early as today or perhaps later this week. According to those around him, several NFL teams have considered the embattled Iowa play caller for various positions.

Not to further aggravate the critical mass of Iowa fans demanding nothing other than Ferentz’s departure, I’ll avoid balancing the ledger with its positive attributes. Instead, we’ll let the stats speak for themselves. The Hawkeyes ranked 100th or worse in every offensive category bar for interceptions (21st), third-down interceptions (29th), and red-zone efficiency (84th). They were 123rd in scoring (17.7 points per game), 124th in rushing yards per game (94.9), 123rd in passing yards per game (156.7), and 130th of 131 teams in total offense (251.6). Going through the other categories is equivalent to reciting the accident report at Antietam. Just accept it for the carnage it is.

Every aspect from recruitment to injuries to underperformance, development, inconsistency, coaching and coordination to play calling contributed to those miserable offensive numbers. Whether Ferentz is the culprit or not, usually offensive coordinators become the scapegoat. That didn’t happen in Iowa, and if he wasn’t the head coach’s eldest son, he probably would have moved on sooner.

But it looks like some staff positions will change, and either Brian Ferentz’s duties or his position will be one of them.

Verdict: The jury is out for lunch, but they’re leaning towards the facts. 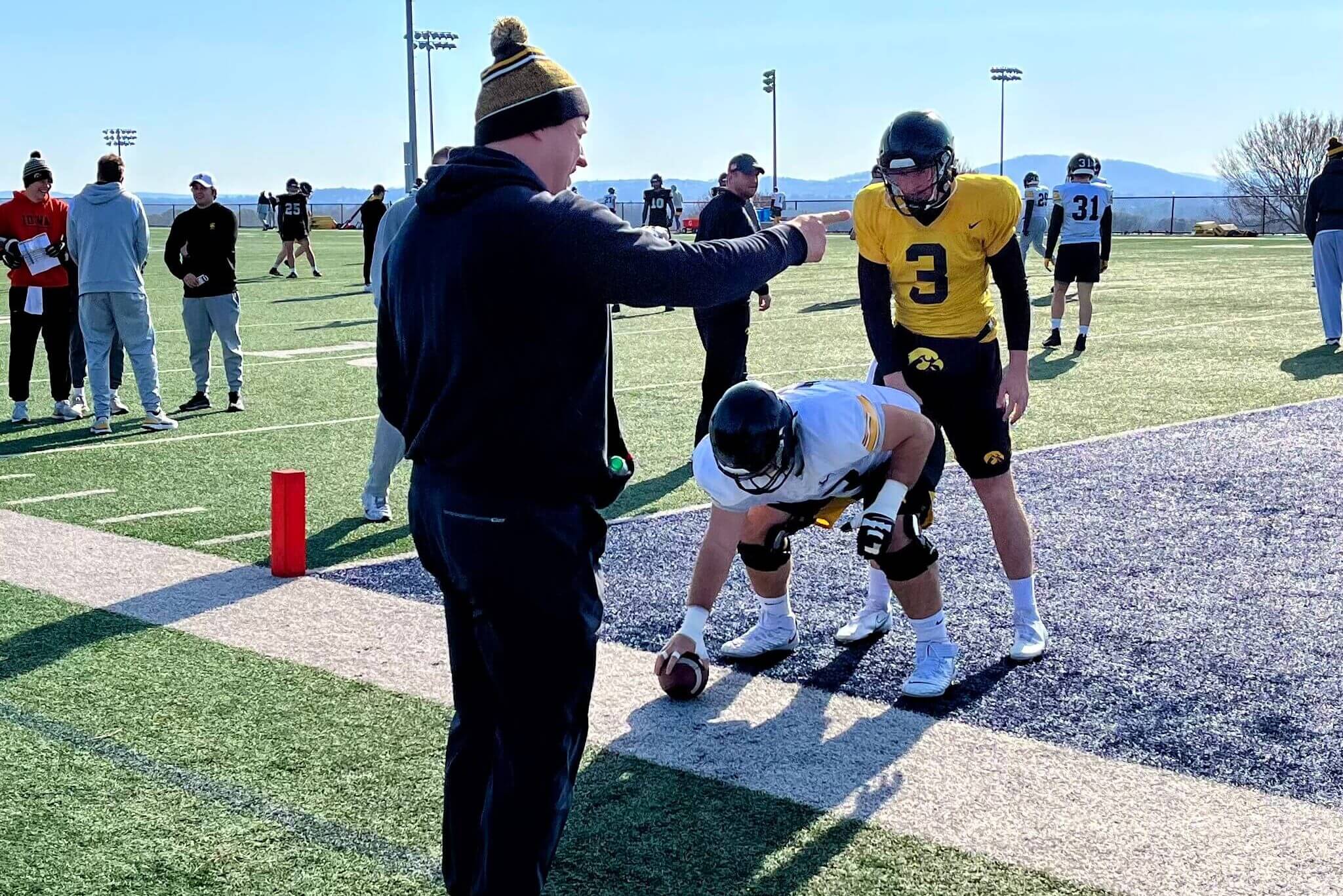 Brian Ferentz has served as Iowa’s offensive coordinator since 2018. (Scott Dochterman / The Athletic)

Iowa has done enough to update its list through the portal

There’s no question that the Hawkeyes have done more than putty a patch or two and called it good. Picking up quarterback Cade McNamara is a program changer. I’m not predicting he’ll get All-Big Ten honors, but he’ll improve that position significantly. In Michigan, McNamara completed 64 percent of his passes in 2021. An Iowa quarterback hasn’t hit 60 percent since CJ Beathard in 2015. If McNamara can replicate that number alone, it could help the Hawkeyes score six to eight more points per game. If he could dodge the passing rush and connect with receivers on the field, it could mean 14 more points per game.

McNamara’s former Michigan teammate tight end Erick All will make up for the potential miss from Sam LaPorta’s absence, while Charleston Southern wide receiver Seth Anderson could become a real find. Additionally, Division II offensive tackle Daijon Parker has the perfect physique and viciousness to play the same position in Iowa. Whether he can apply proper technique enough to become a high-level lineman is undetermined.

How did Iowa fare in the Portal, and where do the Hawkeyes still need help?

These additions are crucial and advance the offense. But are they enough? Probably not. The Hawkeyes could use another receiver, maybe two more offensive linemen and a linebacker. But the difference between spring 2023 and last year is that employees know they’re not done yet.

Recruitment Director Tyler Barnes is continuing to track athletes who may be available in May and visits are taking place this weekend. Swarm Collective President Brad Heinrichs, who regularly posts updates on an On3 message board called the Iowa Swarm Lounge, wrote that Virginia linebacker Nick Jackson plans to visit Iowa this weekend. Jackson was named a second-team All-ACC for two consecutive seasons and led the league with 10.4 tackles per game.

Verdict: Consider today, but probably a fact should commit a transfer or two before the summer.

No worries about state recruitment

The Hawkeyes dominated state recruiting to the last grade. Sure, other programs have rallied top prospects like linebacker TJ Bollers (Wisconsin), tight end Eli Raridon (Notre Dame) or even last month’s tackle Kadyn Proctor (Alabama) every now and then, but Iowa has generally taken what it takes wanted, while Iowa State snapped up the cheap ones on its program and the neighbors picked up the leftovers. That is no longer the case.

Iowa has signed only two of the state’s top 10 players among the 247Sports Composite. The Cyclones competed primarily in central Iowa against the Hawkeyes and won convincingly. Of the top 20 prospects in the state in the Class of 2023, 10 were in central Iowa, and the Hawkeyes signed just one and added another as a priority walk-on. Iowa State has six inked in this area, including three in direct competition with Iowa. That’s a humbling feat for the Hawkeyes, but the Cyclones aren’t as passive anymore when they face off against Iowa. This also applies to Kansas State and Nebraska.

Is this a one-time problem now? Yes and no. The Hawkeyes landed five-star safety Xavier Nwankpa in 2022 and had signed Proctor — Nwankpa’s five-star teammate at Southeast Polk — until he turned around a day before signing with Alabama. Iowa accepted the signing of New Jersey quarterback Marco Lainez III and traded Central Iowa quarterbacks JJ Kohl (Iowa State) and Jaxon Smolik (Penn State). The Hawkeyes also suspended four of the state’s top five players in 2024 (offensive lineman Cody Fox, linebacker Cam Buffington, linebacker Derek Weisskopf and athlete Preston Ries). But the state of Iowa is not going away, and the advantage Iowa once had under retired recruiting czar Reese Morgan has evaporated.

The offensive line will be better

The simple answer is yes. The obvious follow-up – how much better? – has a more complicated answer. The offensive line touched every part of Iowa’s terrible stat line last fall. The Hawkeyes started every game with at least four underclassmen and rarely were they in sync at the same time. There is some talent but it has been too inexperienced to progress throughout the season.

If there’s one statistic showing how this unit has fallen since 2020 (aside from the drop in yards per carry from 4.6 to 2.9), it’s coming from quarterback pressure. Last year, Iowa allowed pressure on 37.8 percent of dropbacks, which ranked 113th nationally, according to TruMedia. In 2021 it was 33.1 percent (79th), in 2020 24.4 percent (21st) and in 2019 even 28.9 percent (46th). Maybe a more agile quarterback can dodge the onslaught a little better, but pressure doesn’t always result in sacks. This needs to be cleaned up or McNamara’s encore will have minimal impact.

Left tackle Mason Richman, left guard Connor Colby and center Logan Jones are likely to make significant progress from last year. The other tracks are question marks at the moment.

Iowa is the favorite of the Big Ten West

By default, the Big Ten West’s preseason conversation regularly turns into an Iowa vs. Wisconsin debate. The Hawkeyes won crucially last fall, 24-10 with a dominant defense, but the Badgers did the same (27-7) in 2021. Iowa returns much of its defense at the elite level, only playing Penn State among the heavyweights of the East Division. Wisconsin revamped its offensive approach to an airstrike under new coach Luke Fickell, adding three new quarterbacks and four receivers. Wisconsin meets Ohio State at home along with the Hawkeyes.

Considering Purdue and Illinois lost big chunks and Nebraska is starting from scratch, Iowa, Wisconsin and maybe Minnesota look like preseason favorites. To pick one that stands out, yes, Iowa is the place to be. Can the Hawkeyes actually challenge the East Division champion in Indianapolis? That’s a question for another day.

Verdict: Fact, but worth reassessing after spring training.

(Photo above: Scott Dochterman / the athlete)