With a win next week, the Hawkeyes can earn their second straight trip to the Big Ten Championship Game. 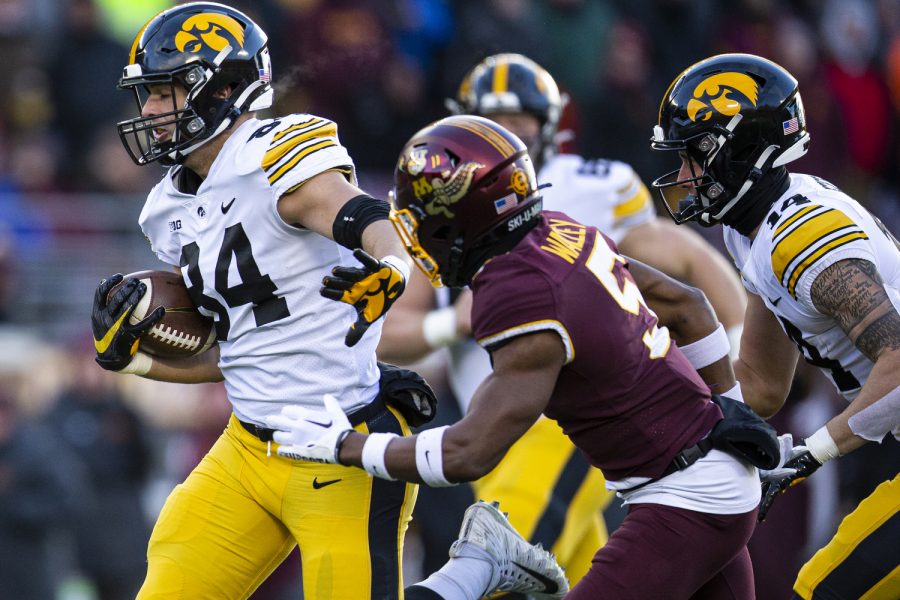 Iowa tight end Sam LaPorta runs after a reception during a football game between Iowa and Minnesota at Huntington Bank Stadium in Minneapolis on Saturday, November 19, 2022. (Jerod Ringwald/The Daily Iowan)

MINNEAPOLIS — The Iowa football team’s offense came out of the gate on hot Saturday at Huntington Bank Stadium. The Hawkeyes scored 10 points on their first two drives against a Golden Gopher defense that was ranked eighth nationally before kickoff.

The Hawkeyes scored a touchdown on their subsequent possession. Iowa drove the ball 65 yards to the 1-yard line. Senior quarterback Spencer Petras then scored via a sneak play.

Iowa’s third and final result of the game was a 21-yard field goal from Stevens with 28 seconds remaining in the fourth quarter. Stevens’ game-winner, and then the Hawkeyes’ 13-10 win, was set up by an interception by linebacker Jack Campbell.

The senior picked up a pass from Minnesota quarterback Athan Kaliakmanis at the Iowa 25-yard line. Campbell then returned the ball to the Gopher 45.

LaPorta and full-back Monte Pottebaum both left Saturday’s first quarter game with injuries. None passed before the game ended.

LaPorta stood on the Hawkeyes’ touchline in street clothes in the second half. Sophomore Luke Lachey and true freshman Addison Ostrenga filled most of the game for LaPorta. Ostrenga and Lachey both couldn’t match the mileage LaPorta put on during the Hawkeyes’ early drives of the game.

LaPorta caught four passes for 95 yards before leaving the game. His 58-yard reception was a career high.

Redshirt newcomer Eli Miller played for Pottebaum on offense. He didn’t record any stats about the game.

Senior Turner Pallissard is the backup full-back listed on the Hawkeyes’ depth chart. He spent most of the competition playing special teams.

The Hawkeyes now determine their own destiny in the Big Ten West. Iowa and Purdue rank first in the division with 5-3 conference records.

Iowa holds tiebreakers over all of its division enemies except Illinois and Nebraska. The Hawkeyes lost 9-6 to the Fighting Illini on October 8 at Memorial Stadium in Champaign.

Illinois fell to Michigan 19-17 in Ann Arbor and fell back to 4-4 in conference play. With Illini’s tiebreaker out of play, a Week 13 win would see the Hawkeyes advance to the Big Ten Championship Game in Indianapolis.

Iowa hosts Nebraska at Kinnick Stadium at 3:00 p.m. Friday. The Hawkeyes and Cornhuskers will fight for the Heroes Trophy.

Iowa has won seven straight games against Nebraska. The Cornhuskers enter the competition fresh from a 15-14 loss to Wisconsin.

Nebraska is unbowlable this season with a 3-8 aggregate record.