The Lunar New Year Gala presented a variety of performances at the Englert Theater to celebrate the New Year on January 22nd. Music, dancing and food were just some of the celebrations that ushered in the new year. 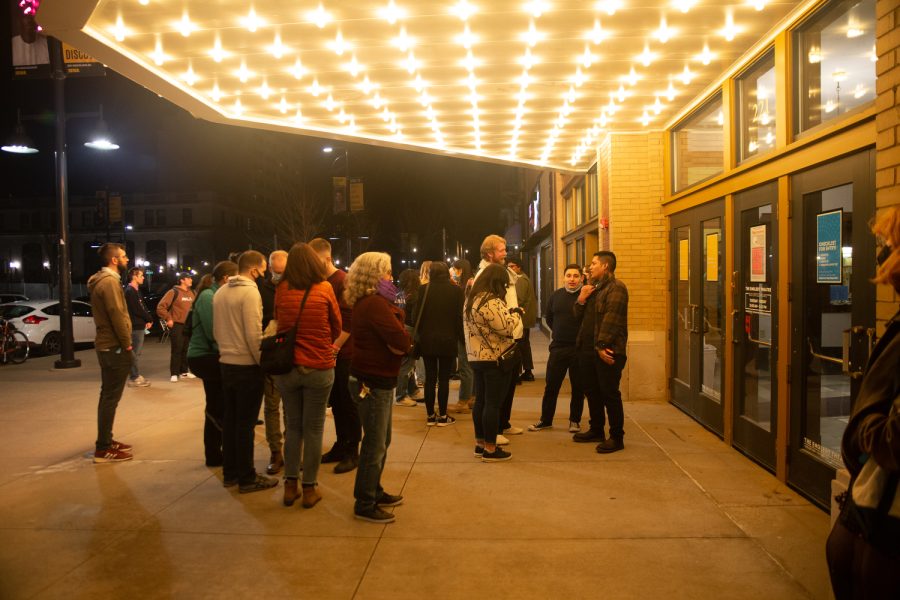 Concert goers gather in front of the Englert Theater in Iowa City on Saturday, April 9, 2022.

Lunar New Year marks the beginning of the lunar calendar – a celebration of new beginnings, reunion and family.

The holiday is honored with music, dancing and food, all of which could be found at the Englert Theater on Sunday.

The Iowa City Area Chinese Association hosted the Lunar New Year Gala, ushering in the Year of the Rabbit. The event featured nine unique performances of music and dance by local artists of all ages. The celebrations highlighted themes of togetherness, celebration and positive outlook for the new season.

Each performer spent up to a month preparing for the event. Ming Hu, a pianist, and Yaxin Sun, a singer, performed two songs together and said they first rehearsed individually and then together.

This was Hu’s third appearance at the ICACA Lunar New Year Gala and Sun’s first appearance at the gala. The gala had a wide range of performances, including traditional Chinese folk dances, choral music, children’s songs and even modern K-pop dances.

“It’s a bit like Christmas, it’s the biggest thing for us,” Hu said, referring to the lunar new year.

The Lunar New Year is celebrated with a two-week festival in many countries around the world, and it is common for students and staff to take the days off to spend time with their families.

The gala also celebrated the recognition of the Lunar New Year as a holiday now observed by the Iowa City Community School District.

“I think the Lunar New Year is the festival I’ve been looking forward to the most in a year,” Hu said. “I see all my relatives, all my cousins.”

Hu has lived in the United States for nine years. She shared that the holidays are a difficult time to be apart from her family.

“I usually just cook a nice meal with my friends,” Hu said. She said she often calls her family in the New Year because she can’t be with them in person.

Lunar New Year means something different to each person celebrating it, which the event highlighted. Each performer chose a play that meant something special to them – something they saw as a good representation of the new year.

“It’s a family reunion,” Sun said of the holiday. “Everyone brings their best wishes for the coming year.”

Sun said she spends time with extended family and enjoys celebrations like food and fireworks in the New Year.

“We’ll stay together and watch the official Chinese TV event from eight to midnight,” Sun said.

The TV program is also like the gala, Sun said. It also includes dances, performances by singers and other musicians, and more.

In the spirit of the year, the gala presented decorations with rabbit motifs, including masks and stuffed animals in bright red colours. Many participants and performers also wore red clothing in celebration and recognition of the holiday.