After playing for the Hawkeyes for all five years of her collegiate career, the five-time All Big Ten athlete reunited with head coach Sasha Schmid as an assistant. 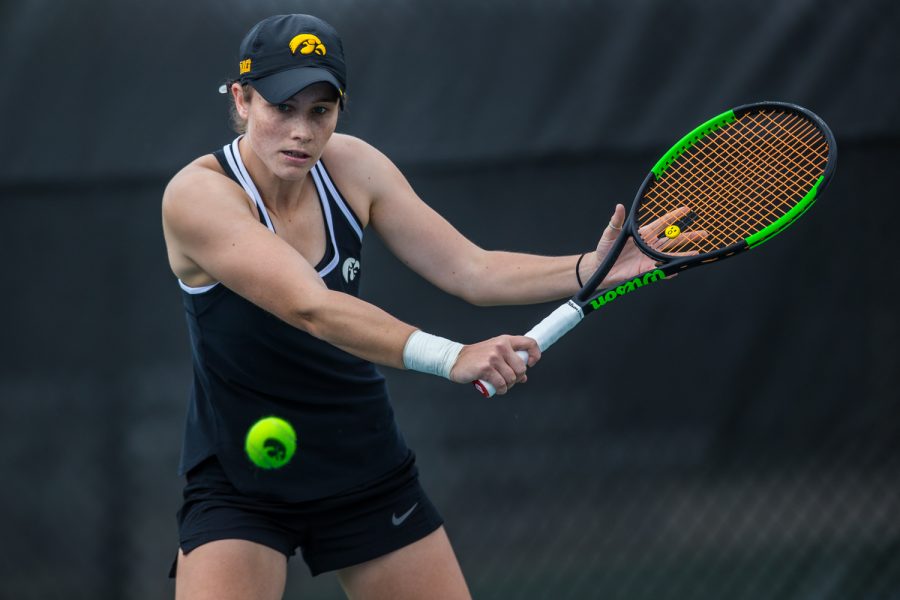 Elise van Heuvelen Treadwell of Iowa hits a backhand during a women’s tennis game between Iowa and Rutgers at HTRC on Friday, April 5, 2019. The Hawkeyes defeated the Scarlet Knights 6-1.

Elise van Heuvelen Treadwell did not end her collegiate tennis career in the way she had hoped.

She was Big Ten Freshman of the Year in 2017 and played for the Hawkeyes for all five years of her career. She became the first player in conference history to earn five first-team All-Big Ten honors. One award was missing: a trip to the NCAA tournament.

“I kind of have a bad taste in my mouth for that because in my senior year we looked like we were going to come back in for the first time in a while,” said van Heuvelen Treadwell. “We were watching the selection show and all of a sudden our name didn’t come up. It was a complete surprise for everyone. [We were] right on the border … that was my very last part in the team.”

After former assistant coach Daniel Leitner left Iowa for Duke on October 7, 2022, the Hawkeyes went almost two months without an assistant coach. During this time, head coach Sasha Schmid’s search for a national coach led her back to her former player.

“Elise definitely stood out and established herself as a front runner,” said Schmid, who is a Hawkeye tennis player herself. “And I knew it was a dream for her to come back after we offered the position…You can’t put a price on being able to return to your alma mater.”

“I say, ‘I’m going home’, and my mother says, ‘What do you mean, you’re going back to England?'” said van Heuvelen Treadwell. “‘Oh no, I’m sorry, Iowa City.’ So, that’s always something from my freshman year. I absolutely loved it.”

After reuniting with Schmid and some former teammates, van Heuvelen Treadwell wants to bring the Hawkeyes back into the tournament while also teaching current players what she has learned throughout her career.

“Some people were like, ‘Oh, you know, that’s hard,'” said van Heuvelen Treadwell. “But I think the respect we all had for each other playing is just understanding the underlying respect. They know that I want the best for them and I use all my know-how to do that.”

Schmid agreed, saying van Heuvelen Treadwell had already made an immediate impact on the team due to her previous experience and familiarity with the program.

“Just a great person to have in training every day to push,” said Schmid. “She obviously played at the highest level and that’s why I think she has the immediate respect of our team. But beyond that, she really has a great natural talent for coaching and teaching, and she has a coaching mindset and heart.”

“She’s super nice, has a lot of energy and is a really good coach,” said Pokorna. “Well, the team chemistry is fantastic with her here and with Sasha. I think they complement each other very well and fit together very well as a coaching team.”

Van Heuvelen Treadwell said she changed her attitude towards playing under Schmid during her five years in Iowa – and the new assistant coach hopes to bring those lessons to her players.

“I’m sure Sasha would say I was a pain in the ass at times,” said van Heuvelen Treadwell. “I had a very perfectionist mindset when I was playing and that was really great at times, but a lot of the time was hampered by accomplishments just because I wanted to be perfect… I think I’ve learned to use that as a strength rather than the negative of it accommodate. I’m very specific about the details of things.”