MINNEAPOLIS — With the wind blowing from the west and a real-time minus 1 a.m. temperature, Iowa linebacker Jack Campbell gathered his teammates during a media break and delivered an impromptu speech that will forever associate his name with this game.

“He said, ‘These are the moments you dream of when you’re a kid,’ and that’s really true,” said linebacker Seth Benson. “‘Tie ball game. Big Ten Football in November and us against them. … Remember your roots. Remember your why. Why you go out there and do what we do and remember all the times you spend with your teammates. Remember why we are here!’”

Campbell did more than talk for the final six minutes of the game. He backed up his words and delivered actions. As the Gophers rammed the ball 88 yards down the field in a drive that lasted nearly nine minutes, Campbell slammed running back Mohamed Ibrahim and forced a fumble that was recovered by teammate Deontae Craig. One possession later, after a tip from cornerback Riley Moss, Campbell intercepted a pass from Minnesota quarterback Athan Kaliakmanis and returned it 30 yards.

The forced fumbling was act one for Campbell. The interception was a crescendo. Together they were a work of art. The interception resulted in a 21-yard field goal with 28 seconds left and a 13-10 win, and Campbell powered the Hawkeyes (7-4, 5-3 Big Ten) to their second big within a win To win ten straight West Division titles.

After that, when he had every reason to be happy, Campbell gave in to his teammates. But in reality, Campbell’s teammates all bow to him.

“It was a total team effort,” said Campbell. “You never know when this play is going to take place. But it’s always a team-mate who gives you that opportunity and you have to seize it.” 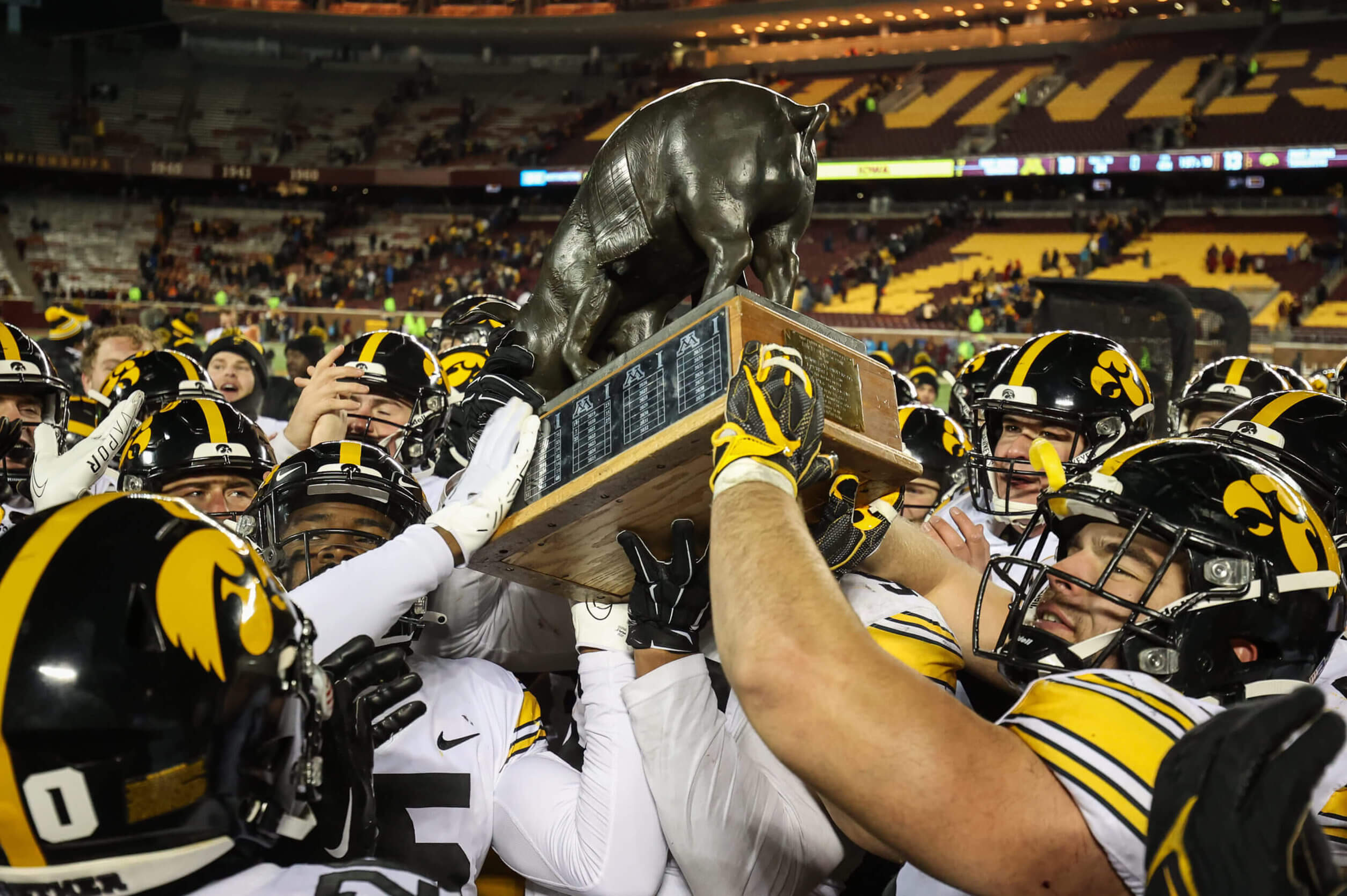 On a day when an Iowa opponent had the most rushing yards since 1993, there was no penalty shootout in a game for the first time since 1986, and Iowa head coach Kirk Ferentz had his third-most wins of all time with Amos Alonzo Stagg, the coach’s victory Hawkeyes will forever be known for Campbell’s performance. And for a good reason.

Ibrahim finished with 263 rushing yards on 39 carries. On a drive that started at the Minnesota 3-yard-line, Ibrahim ran 14 of the Gophers’ 16 plays, which drove to the Hawkeyes’ 13-side. The ball squirted out and Craig recovered it with 5:07 left.

Iowa’s offense brought it back to Minnesota after three games. Ibrahim ran for 19 yards on the first carry, but the Hawkeyes slowed the Gophers after two straight runs to force third and seventh at the Iowa 33. At this point, Minnesota had run the ball in 14 straight games.

“I didn’t think they would throw it,” said Iowa quarterback Spencer Petras. “It was almost like, ‘Throw the ball.’ I felt like we had a really good chance.”

Kaliakmanis fell back and threw a short in-route toward receiver Le’Meke Brockington. Iowa cornerback Riley Moss broke the ball and hit Brockington’s inside shoulder, and the ball raced toward Campbell. The linebacker grabbed it at 23 and sped up the field. Campbell broke away from center John Michael Schmitz’s attempted tackle and contained himself as a wall of Iowa defenders blocked every Minnesota player in his path. Campbell cut back in midfield and appeared to have scored a 77-yard touchdown.

Although the replay showed Campbell staying within bounds throughout the sequence, an official booed him at the Minnesota 45-yard line. The play was blown up and unreviewable.

“I didn’t hear a whistle,” Campbell said. “I looked up at the Jumbotron and… I think I’m still within range.

“I’m just passionate about trying to put my teammates in the best situation. If there’s a big game out there, I want it to be for the team.

Campbell was confused by the whistle. His teammates were angry with him.

“What a game by Jack,” said Petras, “which he hit by the way. Replay, he didn’t fold so it should have been a pick six. It shouldn’t have been as interesting as it was.”

“I was right behind him,” said safety Kaevon Merriweather. “He didn’t get out.”

The official’s mistake could have been costly if Iowa’s offense hadn’t put itself in the field goal position after Campbell’s near-six pick. In the first game after that, Petra’s tight end Luke Lachey hit the Minnesota 12 for a 33-yard pass. Four snaps later, Drew Stevens kicked the winner, and Iowa claimed the Floyd of Rosedale travel trophy for the eighth straight year.

On the field, the cold didn’t bother Campbell, who wasn’t wearing sleeves, although he admitted he put on an overcoat and sat on the bench on the sidelines. After that, his black complexion smudged and his biceps red and scuffed, he couldn’t hide his smile or his mood that he’d done something special. As for the rest of the Hawkeyes, they couldn’t say enough about him.

“I can’t say enough about him, the way he plays, his resilience, just his positivity,” Ferentz said. “Everything about him is just first class. And he comes with big pieces, which is just great to see.”

What seemed unlikely for Iowa four weeks ago has almost become a reality. A 54-10 loss at Ohio State last month saw the Hawkeyes falter 3-4. Now Iowa has won four straight games and only needs to beat Nebraska to advance to Indianapolis.

From the plays between the whistle, to what he says in the scrum, to his handling of every facet off the field, Campbell is one of the main reasons Iowa is in this position. He sets the tone for the field with his aura and playmaking ability.

“Incredible. A first-team All-American,” Merriweather said. “I don’t know what the linebacker award is, but he deserved it. He just did what he does every single day, every single second of practice and in the games. He goes 110 percent. There are no different levels of Jack.