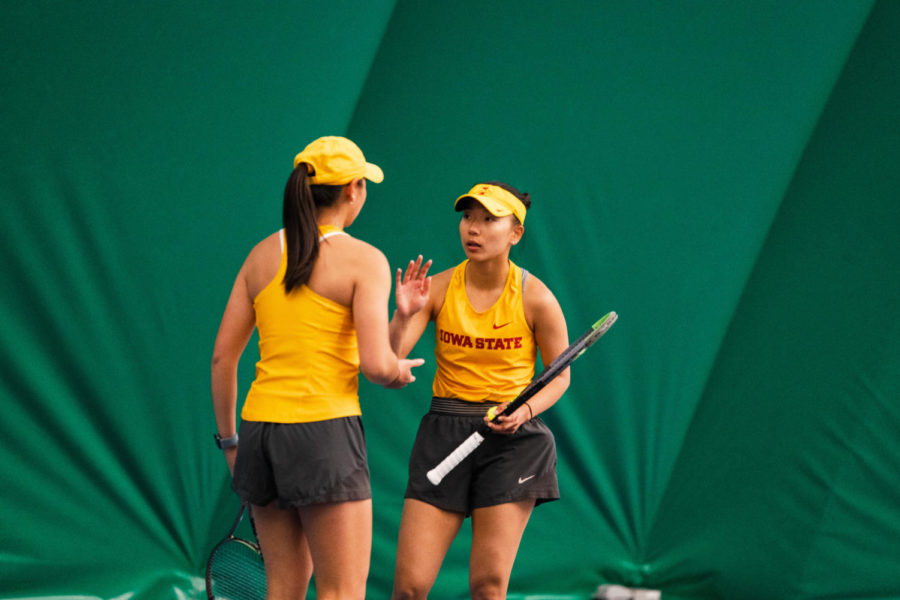 Thasaporn Naklo speaks with her doubles partner Christin Hsieh in the Cyclones vs. Oklahoma Sooners game on April 8, 2022.

Iowa State Tennis was well represented in the latest Intercollegiate Tennis Association tennis rankings as the Cyclones had represented six of their seven players.

The new list, released by the ITA on Wednesday, was the first of the fall season and included the country’s 125 singles players and 60 doubles pairs. Since the fall season of many programs ended following last week’s Fall National Championships, the new leaderboards will most likely serve as spring’s preseason polls.

The Cyclones made headlines as one of only three teams to have three singles and doubles entries in the rankings, joining North Carolina and Texas A&M. Iowa State had all three of its doubles pairs in the nation’s top 50 duos.

Seniors Chie Kezuka and Thasaporn Naklo were both included in the polls twice. Naklo was listed at No. 57 on the singles list after winning 8-2 during the fall campaign and falling 18 places from her No. 39 ranking earlier in the year. The Bangkok native also tied for 40th alongside Kezuka after the pair won 3-2 together in the fall semester.

Kezuka added another piece of history to her college resume by entering the doubles rankings at No. 17 along with partner Ange Oby Kajuru, the highest ranking in Iowa state history. The duo were the strongest of the Cyclones that fall, finishing with a 7-2 record and becoming only the third pair in school history to qualify for the ITA Fall National Championships.

Junior Miska Kadleckova and Kajuru took 39th place in the new ranking as a first-time pairing. The duo caused a big upset at the ITA All-American Championships after defeating Syracuse’s Miyuka Kimoto and Polina Kozyreva, who was ranked 11th, earlier in the season.

Sophomore Anna Supapitch Kuearum and junior Sofia Cabezas were both among the newcomers’ club in the new rankings. Kuearum won the most singles games of any Iowa State player in her freshman fall season, going 11-3 while defeating Oklahoma State’s Kristina Novak at No. 89. She was rewarded with No. 80 on the list.

Cabezas entered the national rankings for the first time after posting an 8-5 record in the fall. The Valencia native was ranked 114th in the new poll after a season highlighted by a win over Northwestern’s Clarissa Hand in 68th place at the Wildcat Invite. She finished that tournament with a 3-0 record as she, Kuearum and Kezuka had a combined record of 8-1 in singles play.

The state of Iowa will begin the spring season in January, although a final schedule has not yet been announced.