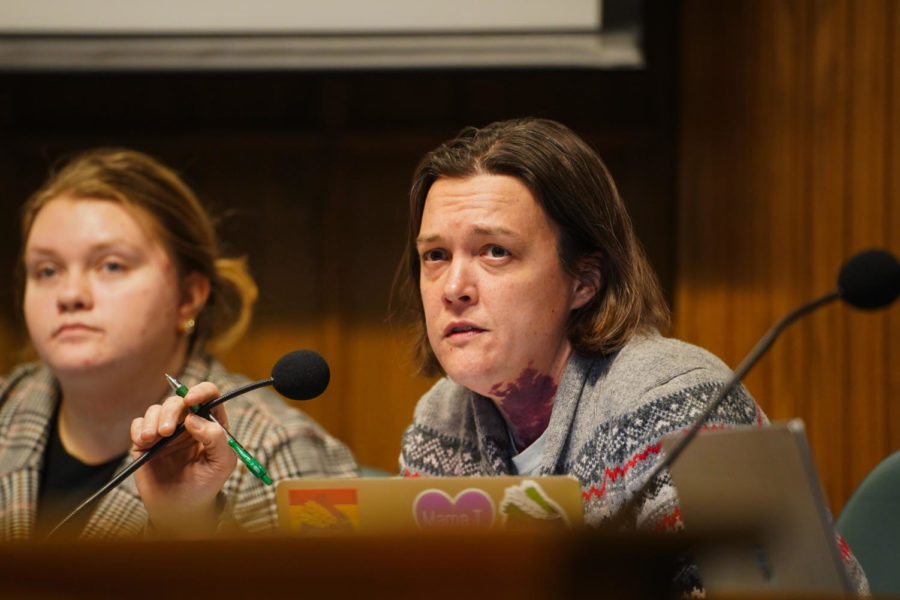 The Ames City Council Tuesday received comments from the public on the proposed Capital Improvement Plan (CIP), which may receive final approval on February 14.

Iowa Wildlife Center co-founder and executive director Marlene Ehrlichsman spoke to the council about concerns about the current shelter.

“I’m so all for moving faster than slow to get a new Ames shelter and you all know it’s needed,” Ehrlichsman said. “The ventilation is abysmal, the spacing is abysmal, the conditions for the animals and the staff are just not of the quality that we should expect here in the city of Ames.”

There was a recent waterbird kill that left Ames Animal Control disposing of more than 40 animal carcasses, Ehrlichsman said, which is emotionally draining for employees.

Ehrlichsman thanked the council for all the work done, but emphasized that this project requires immediate attention. The CIP’s initial proposal did not include shelter improvements, but revisions could be made in the coming weeks.

Will Determan, an Ames resident who lives near S Grand Ave. lives expressed concern about the new S Grand expansion to include S 4th St. and S 5th St.

“Currently, the only safe intersection on this stretch is the traffic light at S 4th St,” Determan said. “Unfortunately this junction is difficult to get to from most apartments and requires a walk back if you want to go south.”

Determan said he appreciates the road’s expansion but suggested pedestrian pathways such as a raised crosswalk and pedestrian crossing lights. Determan’s remarks focused on improving accessibility for the disabled and elderly and general pedestrian safety, which he also shared during a council meeting last summer on S 2nd and 3rd St.

The planning organization held a meeting of the Transportation Policy Committee, which consisted of representatives from the City of Ames, Iowa State University, CyRide, Story and Boone counties, and the Ames Community School District. They met to approve or reject the Iowa Department of Transportation’s (DOT) four-year road safety goals, performance goals for pavement, bridges, systems and freight, and five-year goals for CyRide performance.

“[The Iowa DOT] “Trying to set a realistic target, so ideally we want the number of deaths to go down, but if the data shows that’s not realistic, then they’ll set a target that’s more realistic with the data,” transportation planner Kyle said Thompson.

The Iowa DOT forecasts a 14 increase in deaths and 23 in serious injuries. The committee declined to direct the Ames Area Metropolitan Planning Organization to set its own goals and unanimously approved all of the Iowa DOT’s goals.

The council unanimously reached out to direct staff to create a draft allocation plan to be submitted to the US Department of Housing and Urban Development (HUD) to address service to the homeless through the creation of diverse affordable housing options. A public hearing on the matter will be held on or before March 31st.

Cy’s Roost was due to get a renewed liquor license on the consent agenda, meaning there would be no discussion of the matter, but Ward 1 representative Gloria Betcher wanted further explanation from Ames Police Chief Geoff Huff. Similar to a story previously reported by the Daily, Huff explained that while they had 17 subpoenas at the scene, 13 of which were in possession of fake ID, compliance checks were more important than subpoenas.

After two passed the compliance checks and Huff was assured that the owner would address the citation issue, he proposed to the council that the license be renewed. Pleased with the explanation, Betcher joined the rest of the council in approving the renewed license.

The previously announced joint Ioway Creek trail has been approved as part of the consent agenda.

Mayor John Haila encouraged people to attend the third Community Mental Health Talk Thursday from 6:30 to 8:30 a.m. in the boardroom of the Ames Community School District. In partnership with the school district, the conversation will center on mental health resilience, with Lyndsey Fennelly, former Iowa women’s basketball player.